If BIM’s a Mystery, Here’s the History!

If you’re on our website right now, I would assume you are aware of the term Building Information Modelling (BIM). Since its infancy, BIM has vowed to bestow perks of reduced project delivery time, reduced costs and ultimately increased efficiency. The uptake of BIM in construction projects only really gained traction from the mid-2000s – examples of such projects include Sutter Medical Centre, California USA; One Island East Office Tower, Hong Kong; National Cancer Institute, Putrajaya Malaysia and Crussel Bridge, Helsinki Finland.

By late-2000s, BIM has garnered prominence throughout the AEC industry with various mandates in place and more pending. However, it only feels like the “BIM Hype” has snowballed in recent years, while in fact, the BIM concept has existed since the late-50s. That’s right, the processes and technologies behind BIM have been evolving for at least 50 years! Isn’t it mind boggling that the uptake of BIM in the AEC industry has taken so long? Well, did you know that Wi-Fi (wireless internet) was invented in 1991, yet it was only in the mid-2000’s that the public started using it – hence, one should be pardoned for believing that BIM is a “new craze”. In today’s post, we will unveil the past behind the “overdue” BIM hype.

As a concept, the foundation of BIM was first documented in the paper Augmenting Human Intellect (1962) written by Douglas C. Englebart. Englebart suggests object based design, parametric manipulation and a relational database could come together to realise a vision where … “the architect next begins to enter a series of specifications and data. When he has finished, the revised scene appears on screen. A structure is taking shape. He examines it, adjusts it… These lists grow into an evermore-detailed, interlinked structure, which represents the maturing thought behind the actual design.” 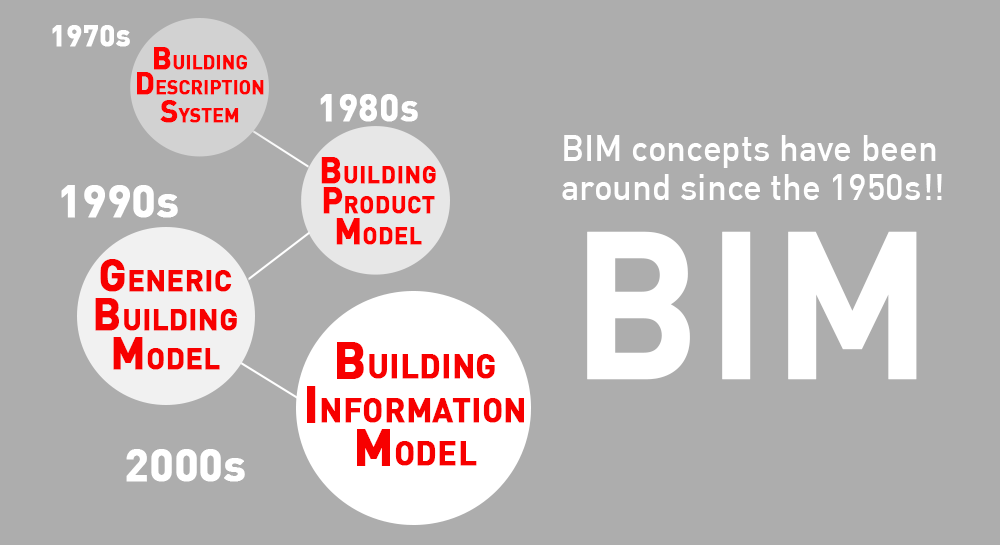 Building Description System (BDS) in the 1970s
It is only in the early 1970s that Englebart’s vision would become reality through the merge of interactive graphical interface technology with a relational database. One of the first developments to successfully create a building database was the Building Description System (BDS). The program uses a graphical user interface, orthographic & perspective views, and a database which allows the user to retrieve information by attributes. The BDS was designed and created by Charles Eastman who is currently a Professor at the Georgia Tech School of Architecture.

Known by some as the “father of BIM”, Charles Eastman claims that drawings for construction are inefficient due to the redundancies of having one object projected multiple times on different scales. He also notes that hardcopy drawings have an inclination to decay over time and fail to effectively track revisions; therefore concluding that BDS reduces the cost of design by “drafting and analysis efficiencies”. Nevertheless, BDS was not widely popular as it had been limited to individual libraries and to design choices such as structural and architectural. Thus, Graphical Language for Interactive DEsign (GLIDE) was introduced in 1977, which both incorporated and built upon BDS.

GLIDE was developed to include certain building elements and more noticeably, to be used as a tool in monitoring the accuracy of data, cost estimating and evaluation of structural design. These enhancements allowed GLIDE to produce 2D drawings with enhanced reliability and accuracy. However, both BDS and GLIDE were limited to involve only the design stage of a project. In order to achieve a more comprehensive review, further collaboration allowing the immersion of the different phases of a project life cycle needed to be included.

Building Product Model (BPM) in the 1980s
Fast forward to 1989, and a new program called Building Product Model (BPM) was developed which covered design, estimation and construction processes –comprising information from projects from planning to completion. It acted as an archive and framework of concepts, technologies and standards. However, BPM only focused on product information instead of integrating information that was useful for design and construction management in the AEC industry- further development was needed.

Generic Building Model (GBM) in the 1990s
Enter 1995 and the Generic Building Model (GBM) was introduced to expand and integrate information from current and future design that could be used throughout a project life cycle – allowing multiple collaboration points amongst a project’s stakeholders. Then, we welcomed the new millennia and if you recall, the exponential technological advancements coming into play greatly impacted and transformed the way literally everything worked. The AEC industry, no different, scurried to adopt and expand their usage of technology for enhanced project management and delivery.

Building Information Modelling (BIM) in the 2000s and onwards
Consequently, Building Information Modelling (BIM) was introduced in advent of the technological revolution. It is vital to recognise that BIM is not a program or software, but a set of practices built upon prior research to utilise best available technologies; improving information flow, reducing errors and therefore increasing efficiency though collaborative construction. Currently, no single software delivers a complete BIM solution; instead, an assortment of software is utilised simultaneously throughout the Appraisal, Design, Pre-Construction, Construction and In-Use phases.

Looking back, BIM has been floating about for more than 50 years, so why hasn’t it been adopted more heavily and why is it only recently that people started to take note of it? There are primarily two forces resisting the implementation of BIM which could be classified as Managerial and Technical.

Managerial forces include the uncertainty of ownership amongst stakeholders. Who should develop, operate or own the Building Information Models? How will incurred costs be fairly distributed amongst stakeholders? How can we effectively implement and normalise the process? These all come down to the refusal of allocating extra costs, time and human resource. While technical forces consist of issues from data interoperability to security. It is safe to conclude that the long build-up to where we are now was due to the social and habitual resistance inherent in our human nature.

So, to conclude let’s just quickly run through the developments leading to up to BIM from 1970 up to late 2000. BDS, the seed of BIM, focally addressed the design application but was limited to building elements. GLIDE, an improvement of BDS again focused on the design aspect with enhanced visualisation and the ability to conduct estimation from the designs. However, both BDS and GLIDE were solely applicable at the pre-construction phase. By 1989, BPM was introduced as the replacement; touching upon design, estimation and project delivery processes and translating project information to relationships between construction activities. Then in 1995, GBM was introduced to further integrate information with construction activities throughout a project’s life cycle. Finally, in 2000, the term BIM was coined and popularised; a paradigm shift due to technological advancement has led to various BIM mandates, which has consequently led to the “BIM Craze” of late!

Overall, the history of BIM contains much development and goes back further than you may have thought! But it proves that, far from being the latest fashion, BIM is here to stay and has decades of research backing it up. If you’re not on board with BIM yet, there’s no time like the present to look at how it can improve your business! For more on how CostX & BIM can work together, click here.