Each month we will ask a Product Specialist at Exactal what their favourite feature of CostX® is, and how it can be used. This month, we are speaking to Matthew Donnison from the London office.

I believe the rate libraries are one of the most useful, yet underused, features of CostX®. When setup properly they give users the ability to automatically extract man-hour information to provide to Planners/Schedulers, bills of materials for purchasing departments to order from, splits of labour/plant/material/subcontractors for management teams to forecast from, and when combined with CostX®’s BIM Model Map tools they can even be used to automatically generate cost estimates from BIM files with the click of a button.

Creating a rate library and then entering rates is easy. Firstly, if lots of historic data already exists within a company then it can be imported from Excel, or if starting afresh then it’s easily done from within the ‘System Administration’ area of CostX®. 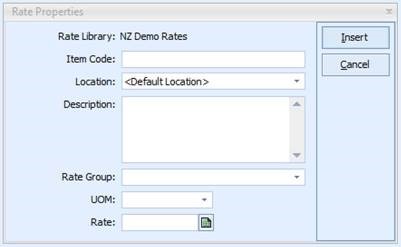 When creating a rate, the rate properties window will appear with various fields to fill out (as shown above). These fields are as follows-

Item Code: This is one of the crucial aspects to plan in advance, there’s no set format required (you can use numbers or letters or both). Personally, I always start my codes with a letter designating what type of item it is, which can be used later on for the filtering and sorting. For example, L-Labourer or L-Carpenter (L being ‘labour’), P-Excavator or P-Dozer (P being ‘plant’), M-Concrete or M-Rebar (M being ‘material’) or S-Flooring or S-Tanking (S being ‘subcontract’). The code needs to be unique, so if you want to include codes for different grades of concrete (as an example), each will need a slightly different code.

Location: This can be used when pricing different jobs regionally or internationally, so the same item (e.g. L-Labourer) could have a price of £30/hr in London or £20/hr in Manchester as an example. In this case, if you are creating a copy of a previous project that had been priced (e.g. a school in Manchester) but the new project was elsewhere (e.g. a school in London) then you just change the location and all of the rates will automatically change to reflect the relevant local market.

Description: This is self-explanatory, but it’s worth making the effort to include a reasonably detailed description of the rate as this is what is used when automatically creating bills of quantities or cost estimates from BIM.

Rate Group: This is just for your own use to create sub-folders to help filter and sort the rates in the library if there is a large list.

UOM: Unit of measure – as best practise you should try and standardise your unit of measure notation. As an example, if measuring steelwork then you should decide if you want to use ‘tonnes’, ‘t’ or ‘Te’ as examples – or for rebar it would be ‘tonnes’ or ‘kilograms’ as another. The UOM list can be set-up within ‘System Administration’

Rate: Finally the rate can be input. If it’s just a single figure then it can be simply typed into the box e.g. the labour rates I mentioned above would just be 20 or 30 depending on the location. Alternatively, if the rate requires a build-up (i.e. it is a composite rate built up from labour/plant/material components) then the small spreadsheet button can be pressed to load up a sheet in which the custom build-up can be created.

The composite rate build-ups are crucial to the process, and using this method one rate can be linked to another – so an item for laying of blockwork can be built up from first principles: 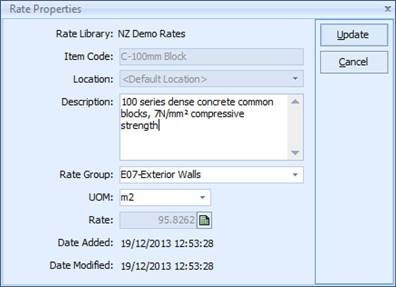 If the source rate is changed, e.g. if L-Bricklayer in the above example was increased due to wage inflation, it would automatically feed through to every built-up/composite rate where a bricklayer was required. However, the production factor would remain the same until manually amended (as production factors shouldn’t often fluctuate).

In the right hand side of the spreadsheet (Column I onwards) are the user columns, and just like in the workbooks these can be used for whatever functionality is required, for example to extract the man-hours or to carry out a L/P/M/S analysis.
I typically use the format below, but it’s flexible depending on what you’re trying to achieve:

That covers the main points of setting up a rate library, you’ll have to keep following the blog for further tips on using the rates in your workbooks and for 5D BIM estimating – or get in touch with your local Exactal office here for information on the training options we offer.